During the summer, the second cycle of composting of the vine shoots has continued. As in the first cycle and continuing with the pruning management system, vine shoots were stored in the collection points. Once the chopping was made, they were transported to the transformation site in the Cooperative Bodegas el Rosario in order to start a new composting process.

The overall duration of the composting will be 6 months. Thanks to this process, mature compost, free of pathogens and weeds will be obtained in order to be used again in the soil as an organic amendment. To ensure the hygienization of the compost, pharameters as mixing/agitation, temperature and humidity, microorganism inoculation and physical-chemical analysis will be controlled. The process will end in 2019.

On the other hand, the compost obtained from the previous cycle of composting has been stored in bags to ensure its conservation and to facilitate its transport and distribution to the viticulturist ‘plots where the vine shoots were obtained. The distribution of the compost will take place after the wine harvest for its application to the soil during the fertilization period, in order to close the cycle “use/waste/handing/re-use” in the vineyard. 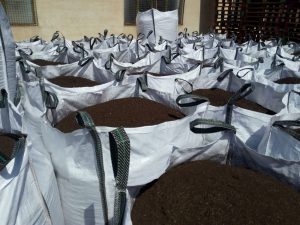 It is worth mentioning that thanks to the adhesion to the project of new wineries during this second cycle (2018), all of them located in the town of Bullas, the project has been provided with shoots from approximately 100 more hectares.

Finally, the monitoring of the urban micro-gardens of Bullas where the compost was applied, has continued during the summer and the periodic measurements will continue during the coming months. 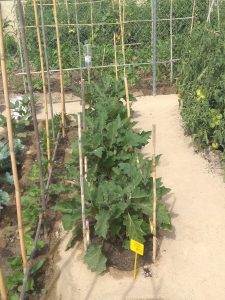