The work carried out by Cooperativa Bodegas El Rosario of Bullas on climate change mitigation, jointly with Microgaia Biotech and EuroVértice Consultores in LIFE SARMIENTO has been reinforced this year thanks to the incorporation of new hectares of vineyard to the project from other wineries from P.O.D. Bullas. The wineries, with their disinterested collaboration, provided the vine shoots from the last pruning carried out during the past winter in order to be transformed into compost through the waste management system that LIFE SARMIENTO uses.

Specifically, theses wineries have been Bodega Carrascalejo, with the contribution of their vine shoots from 73,58 ha, Bodegas Lavia, supplying the pruning waste from 9,85 ha and Bodegas Monastrell which has provided the vineyard pruning waste of 6 ha in the project.

We invite you to know more about these wineries and about their tradition, vineyards and wines. 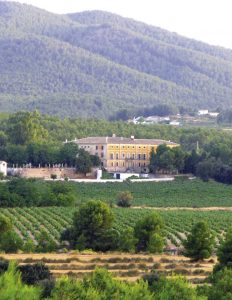 The Hacienda de Carrespalejo belongs since 1850 to the Pidal family that has been producing home-grown wines for five generations.

Carrascalejo is located between the towns of Bullas and Cehegín, at 640 meters altitude above sea level. The property has an extension of more than 1,000 hectares that are distributed among pine forests, scrubland and different crops, mostly dry, such as cereals, almond trees and, above all, vineyards. 74 ha of the vineyards have supplied their pruning waste to the LIFE SARMIENTO project.  Presiding this landscape is the Casa-palacio, in whose cellars the winery is located, and where home-grown wines have been produced since the 19th century.

Since then, the care of the vineyards and the careful preparation of their wines following traditional methods, together with the adaptation of new technologies, have led the wines of this winery to achieve recognition in the most demanding markets.

In their vineyards, predominate the genuine Monastrell variety, with vines over 40 years old. There are also Cabernet Sauvignon grape cultives, Syrah, Tempranillo, Merlot and Gamacha, which, in appropriate proportions, enhance the virtues of the native variety, resulting wines of strong personality.

If you want to know more about Bodega Carraspalejo click here. 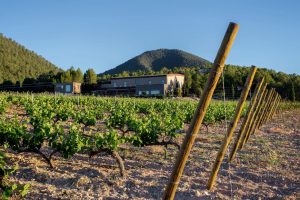 Bodegas Lavia was born in 2003, when a group of wine lovers, fascinated by the potential to produce unique wines in the Region of Murcia, decided to join to create the winery.

Bodegas Lavia, in Cehegín (Murcia), began its activity as a winery of small dimensions but equipped with the latest technological advances and which shows great respect for the environment, achieving the maximum balance in its plantations and the maximum expression in its DO Bullas wines from own grapes in an ecological way.

Its was the singular peculiarities of this winery, that fitted perfectly with the requirements demanded to be part of the great MGWines Group family, which led its inclusion in the group during 2014.

This winery, currently counts on the certification of ecological production by the Council of Organic Agriculture of the Region of Murcia in all its references.

Bodegas Lavia is located in Venta del Pino, a place of great landscapes richness and strong viticultural character where areas of the height Monastrell variety t are located, at 800 meters above sea level, with more than 40 years.

The country house has 12 hectares of Monastrell vineyard, in addition to a small plot with Syrah on one of its slopes. From these 12 ha, approximately 10 ha have contributed to the supply of vine shoots for the project.

For more information visit the website of Bodegas Lavia.

Bodega Monastrell is born from a long family farming tradition. Own vineyards, wishful thinking and a well-designed solid project are the foundations of this winery, that in 2005 vinifies its first vintage.

The vineyard is located in the Valle del Aceniche, between the municipalities of Cehegín and Bullas (Murcia), with an altitude higher than 850 meters above sea level. The country house, entirely owned by the family, has a cultivated area of 20 ha next to the winery, of which 6 ha have joined the LIFE SARMIENTO project.

The climatic and edaphic characteristics of Valle del Aceniche make easier to obtain grapes with excellent oenology properties in each of he varieties cultivated by Bodega Monastrell, which owns 90% of Monastrell, 8% of Petit Verdot and 2% of the Tempranillo variety.

The winery practices viticultural techniques according to a biodynamic agriculture, respecting the nature and following its vital rhythm. In turn, both, the wine production and the wines of Bodega Monastrell are protected and certified by the Council of Organic Agriculture, since the 2011 vintage. 100% of their wines are Tintos de Crianza (reds with ageing wines).

You can find more information on the Bodega Monastrell website.