Members of Microgaia, coordinating partner of the  project, visited the composting site in Bodegas El Rosario facilities in order to add the last components needed to complete the maturation of the compost: two types of microorganisms that will provide the ideal characteristics as organic fertilizer. 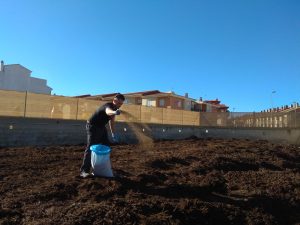 The vine shoots or sarmientos pruning management cycle developed by the project begins with the annual pruning of vineyards at December and concluding on February approximately. Once all the branches are transported to the processing plant the composting process begins, which lasts about six months: three months for the initial composting and three more for the final maturation of the compost and preparation of the compost that later will be applied in the vineyard plots just after the next pruning.

The composting process is aimed at producing the biological decomposition and the stabilization of the organic matter under temperatures of 60ºC-70ºC, in order to produce a stable final product, free from pathogens and undesirable weeds, which can be used again in the soil as an organic amendment. The process main works are the periodic stirring of the waste and the addition of water. During the last stage of maturation, two types of beneficial microorganisms, Trichoderma harzianum and Arbuscular Mycorrhizal Fungi (AMF), are inoculated into the compost, which will increase the later delivery of nutrients to the vines, facilitate their growth and provide them also resistance in front of pest.

The result is an organic amendment that improves soil quality while providing also favorable features for the crop and an ecologically feasible peatless substrate with enhanced properties compared to the existing ones. The composting cycle will be repeated 4 times over the 4 years of the project in order to be able to monitor significant changes in soil, plant and yield data.